I live and write on Lingít Aaní, and gratefully acknowledge the past, present and future caretakers of this beautiful place, the Jilkaat Kwaan and Jilkoot Kwaan. 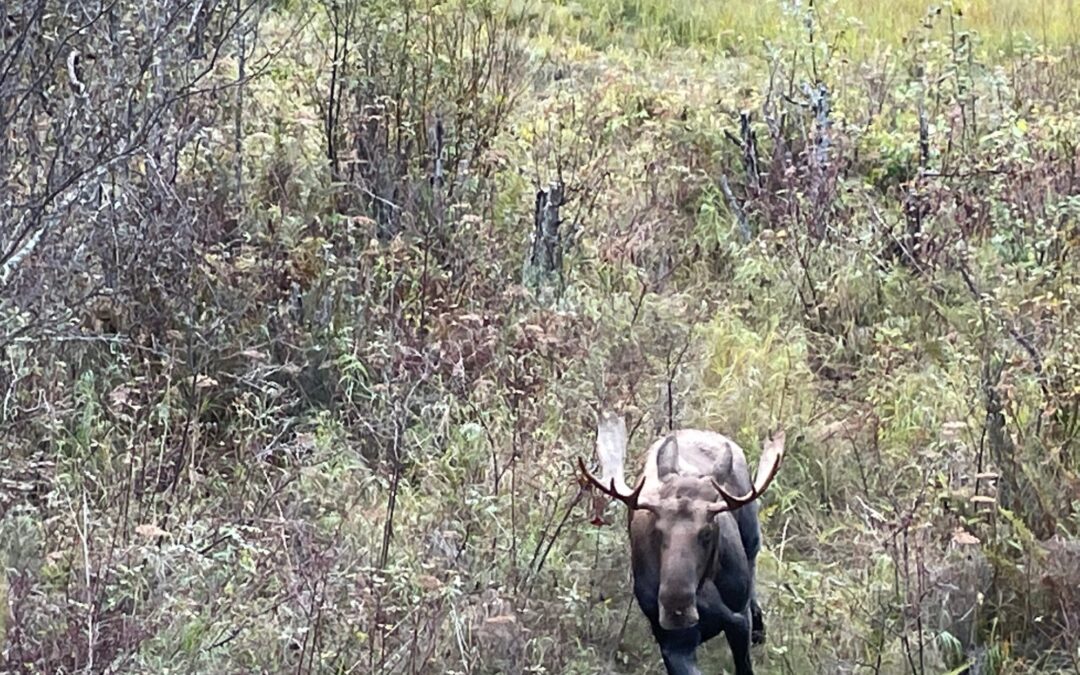 The last cruise ship of the season is here. So is the first day full day of Fall, and also right on time: white frosting on the high peaks and ridges– I don’t like to call it termination dust, since the first snow on the mountains feels as much like a beginning as an end, and it is expected, as the Irish say, and thus ‘neither a good thing nor a bad thing.’ Actually, these days just having seasonal weather that is normal feels like a very good thing. The storm battered west coast of the state is really in a mess– so much water everywhere and damage at the time of year when it needs to get cleaned up quickly. The Alaska Community Foundation is taking donations thru their Western Alaska Disaster Recovery Fund.That’s the one I’m giving to.

It is moose season, and we have been moose hunting up the river ( well, not too far up, but far enough to need a boat to get there, and far enough to not have cell or email service, so it feels very far, in a good way.) The river was high when we arrived, so we couldn’t walk through the dry washes to favorite moose look-outs, even with hip boots. The water in the swampy meadows was deep enough to need to wear them though, should we get a moose in one or on the other side of one and have to pack the meat out. 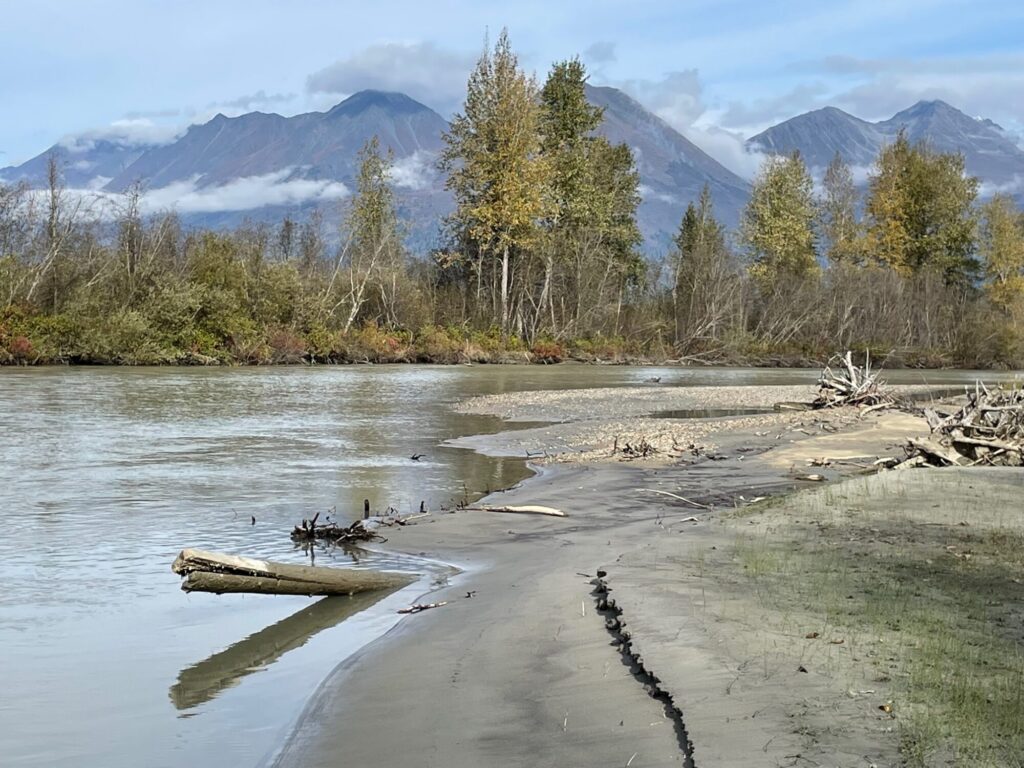 It was a nice five days, and we will head out again soon to try it again. Well, not too soon as Chip wants to see the Eisenhower Dance Detroit  contemporary dance troupe perform at the Chilkat Center Friday night at  7. Tickets are at the door, and students are free thanks to a generous donation by Haines Arts Council supporters.It should be great. There is also a middle school cross country meet on Saturday at 11:30, and our daughter Stojanka is the volunteer coach. Isn’t that wonderful? The last Farmer’s Market of the season is Saturday too at the Fairgrounds. And remember we vote on October 4th. I am hoping to go to the book club dinner next week. It’s themed around one of my favorite books, A Gentleman In Moscow. It will depend on the moose in the freezer situation.

I was under the weather at camp, and more so once I came home. I was pretty sure it was terminal stomach something–  cholera or cancer– but since I’m improving figure it was probably the Norovirus ( it’s not uncommon in cruise ship ports, alas) or a variation of it. Several folks in my circle suffered the same symptoms. I’m a lot better, but only about 60 percent. Everyday now seems to be a little easier on the insides. On the plus side, I had time, while resting in bed, to see the Queen’s funerals (it was a lot.) The corgis and her pony made me cry. On the one hand I love the history, on the other, the monarchy, so-called divine rights over land and people, animals and minerals– colonization– that same history, has caused the world– Native Alaskans especially– so much hurt and harm. That history is criminal. There is so much work to do to address the wrongs of the past. To expose the truth. To change.  As my husband reminds me when we hunt, the most dangerous animal in the woods is us.

Here are some pictures of camp life, from setting up the tent and unloading the gear,

to proof of why falling out of a tree stand is a fairly easy thing to do, and a serious accident to avoid — we are up pretty high– I am always very careful.  Fireman Al,  who helped save my life (and many others) fell from a high branch he was using as a look-out farther up North in Alaska,  and broke his back. Thank God he is okay– after a long surgery- but he will have a significant recovery ahead.

We did have a thrilling encounter with a bull, but he was not legal. Which means that we could not shoot him. The only moose that can be taken out of these woods must have antlers with three brow tines, or a fork or a spike, or be over 50 inches wide. It is very tricky. This hunt is the opposite of what you may think about guns going off right and left. No one shoots at “anything that moves.” Most people don’t shoot at anything. You have to be certain and it takes a lot of looking. We spent a morning calling one in, but he was not legal.

We get up really early– like 4:30. Light a fire in the stove, make coffee, eat, pack a day pack, dress and tip-toe out at first light. Dawn at the stand is my favorite time. On one morning the spider webs looked like decorations hanging in the trees– I wish I could take a picture to do the magical scene justice. I tried. 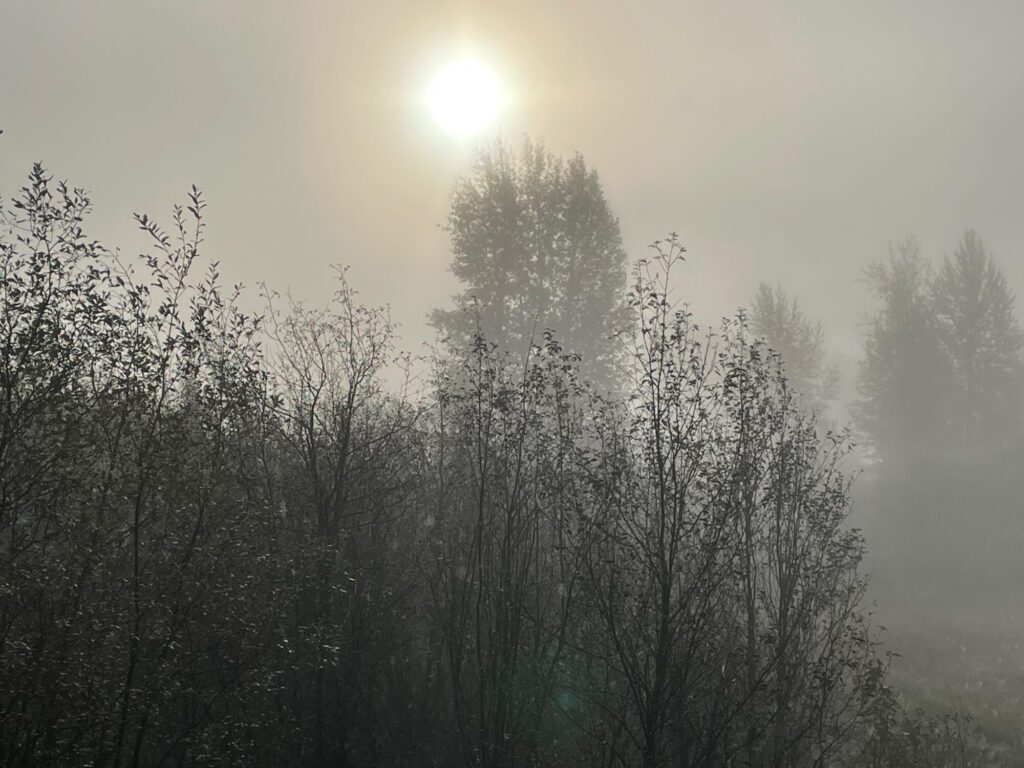 We head back to camp at midday for lunch and a nap.

It’s a pretty cozy tent. Not exactly “glamping” — but it’s close, don’t you think? And it is my vacation, so I’ll take it.

It is also waterfront, and you can’t beat the views. I love it up here. It is plenty. A gift.  No matter how the hunt turns out.

← Of Bears and Berries Sunday’s Thought →

If you are looking for a way to help Haines during the emergency, please donate to the Chilkat Valley Community Foundation Emergency Response Fund.  I am a founder and long time supporter of the Chilkat Valley Community Foundation and am sure that this fund will be used wisely to help those organizations and individuals in need in both the short and long term. The need is great, and your generosity is appreciated more than you know.